This article was published in Binder Bulletin #19 February 2000

Hydro-Boost is the name of a hydraulic power brake booster patented by Bendix in 1974. The Hydro-Boost unit is used to increase fluid pressure in the brake system, while reducing pedal effort. This unit does the same job as a vacuum booster, and is connected to the brake system the same way. The main difference is the Hydro-Boost uses pressurized fluid from the power steering system to create its assist. The Hyro-Boost system was designed to replace vacuum assisted brake boosters used in car, and light truck applications. Safety regulations governing stopping distance, and brake pedal effort, plus the reduced vacuum, and higher under hood temperatures from emission controls were some of the reasons the Hydro-Boost was developed. Some of the Hydro-Boost features are:


Since the Hydro-Boost operates without the need for a vacuum source it is ideal for Diesel powered vehicles. Turbocharged, supercharged, or modified gasoline engine powered vehicles are also applications were the Hydro-Boost works well. Even stock gasoline engines can benefit from less hoses & connections to cause vacuum leaks, and rob manifold vacuum from the engine.

There are two versions of Hydro-Boost units that have been used. The original Hydro-boost has an accumulator that uses a spring or pressurized gas in a canister to provide stored energy for 1-2 power assisted brake applications with the engine stopped. The Hydro-Boost II has the reserve system incorporated into the main power piston, making it smaller, lighter, and it also has fewer parts.

Installing a Hydro-Boost in a Scout II

I installed a Hydro-Boost on my 1980 Diesel Scout. I had several reasons for converting to the Hydro-Boost system. The main reason was that I needed to install a larger alternator for a winch. By using the Hydro-Boost I could eliminate the alternator driven vacuum pump, and replace the stock alternator with a higher output unit. A secondary reason was the original vacuum boosted system did not work as well as desired.

I would like to point out that installing a Hydro-Boost is not a "Cure All" for every possible brake problem. If you have problems with your current vacuum booster, such as a leaking diaphragm, replacing it with a Hydro-Boost would eliminate the problem, and provide you with greater braking power. If you have a problem such as worn shoes, pads, rotors, or drums those problems should be identified, and corrected first. Make sure the overall condition of the system is in good shape before you begin.


Another point I would like to make is any modification made to your brake system can affect the safety of the vehicle, and the safety of others. Make sure you thoroughly understand the system and the installation procedure before you begin. Always make sure the system operates properly, and has no leaks before driving the vehicle. The most important safety feature of a vehicle is its braking system. Typically the brake system must dissipate the energy of motion up to 10 times faster than it is created. The brake system should be the BEST system on the vehicle.

I started by researching vehicles that used a factory installed Hydro-Boost system. I was looking for a unit that was used in a system that was similar to the Scout's brake system. I found that several models of full-size GM Diesel cars used a similar sized master cylinder, wheel cylinders, and calipers as the 1980 Scout II used. I chose a 1981 Buick LeSabre Diesel for the donor vehicle, I started by removing the booster, master cylinder, hoses, and power steering pump from the donor vehicle. The original mounting bracket was removed from the Hydro-Boost, the nut holding the bracket had to be loosened with a chisel, and then removed with channel-lock pliers. Next the original booster and master cylinder was removed from the Scout. 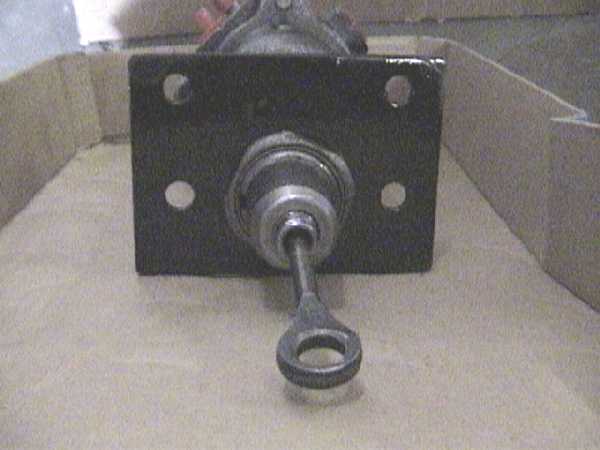 Installing the Hydro-Boost requires some metal fabrication, and a slight modification to the firewall to allow clearance for the end of the booster. A 1/2" drill with a 2-1/8" hole saw is needed to enlarge the original hole in the firewall. I made a guide for the hole saw from a piece of 5" x 3" x 3/16" steel plate. For the guide plate I sawed a 2-1/8" hole thru the plate, with holes on each side to bolt thru the lower mounting holes for the original booster. The mounting plate for the Hydro-Boost was made from 3/16"thick steel plate, 3-1/2"high x 5"wide, with a 1-5/8" hole for mounting the Hydro-Boost, and 4 3/8" holes for mounting the assembly to the firewall. on a recent install I used ¼” thick plate which made the link to pedal dimension move slightly forward. This improved the pedal height and made the pedal position EXACTLY the same as the original. I would recommend using ¼” thick material for the mounting plate. after the booster & mounting bracket are assembled, the booster is positioned in place on the firewall, and bolted in place. The push rod is connected to the pedal similar to the original linkage on the vacuum booster, and secured with a washer, and cotter pin. The hole in the push rod was the same size as the original, no modification was necessary. I opted for using the power steering pump from the Buick for two reasons. First was the need for a place to connect an additional return hose from the Hydro-Boost. This could have also been done by using a tee in the present return line from the steering gear, but I thought routing the hoses would be easier by using the pump with the provision for the additional connection. The fluid reservoir could also have been changed, but since the pump itself was identical, and had the proper connection for the hose it was easier to use the complete unit. The only change needed was to remove the pulley, and install the pulley from the original Scout pump. 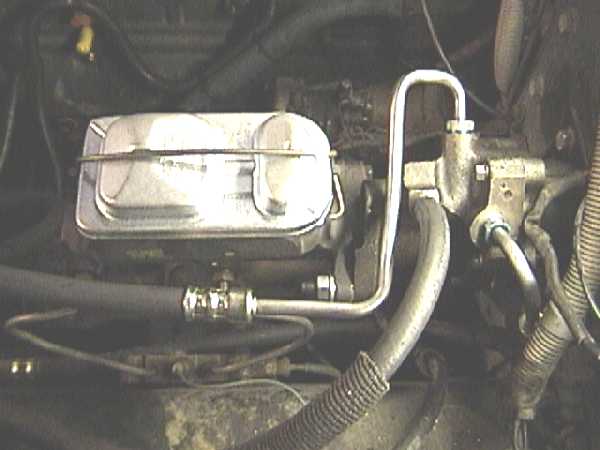 The final step is to bleed the brakes, check the adjustment of the stoplight switch, fill the steering pump, and check all connections for leaks. Road test, and check for proper operation. My experience has shown a much lighter foot is needed to apply the brakes with the Hydro-boost. Use caution until you get used to the new system.

I have been very satisfied with the Hydro-Boost. The brakes require much less pedal effort both with the engine running, and without. The braking power is greatly improved as well. The added room in the engine compartment is also a bonus.

Can the Hydro-Boost be used on other vehicles? The compact size of the booster, along with the simplicity of installation makes it a good candidate for use in other vehicles such as pickups, Travelalls, and even early model Scouts. The next project here will be a 1967 1200B originally equipped with manual brakes. Stay tuned for more. 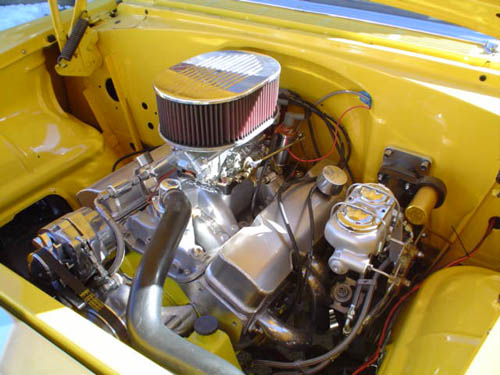 
Note: Neither the author, or the Binder Bulletin can assume any responsibility for any modifications that you make to your vehicle.

I found a master cylinder from a 1979 Chevrolet Diesel pickup that is originally equipped with Hydro-Boost uses a master cylinder with the proper mounting for the booster, and has both ports with standard threads identical to the original Scout master cylinder. This simplifies the installation since you do not need to replace or modify the fittings on the original lines on the Scout. The only change is a slight bending of the line to connect to the relocated master cylinder. Bendix PN: 11944

You need to be a member of Smokin' Scouts Club to add comments!